Bradford back at Wembley after goalless stalemate at Fleetwood 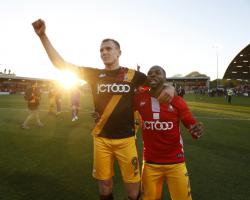 Rory McArdle's goal in the first leg of their semi-final against Fleetwood proved pivotal, with a goalless draw in the return fixture at Highbury on Sunday enough to see Stuart McCall's side return to Wembley, a venue they visited twice in 2013 for the League Cup and League Two play-off finals.

And they will meet Neil Harris' Lions in the showpiece contest 12 months on from Millwall's win over Bradford in last year's semi-finals.

That Fleetwood were even at this stage was admirable given they were in the ninth level of English football when Bradford were last a second-tier club in 2004, but they went down with a whimper having barely troubled visiting goalkeeper Colin Doyle across the two games.

Though the Bantams held that slender first-leg advantage, their hosts did not throw caution to the wind in a first half where they looked disjointed.

Early attempts from the visitors' Billy Clarke were either volleyed or steered off target and it took until the 28th minute for either side to register a real opportunity of note.

It was Bradford who did create the chance when Mark Marshall's deep right-wing cross was met by Charlie Wyke at close range, with the striker somehow nodding against a post when it looked easier to score.

Fleetwood finally tested Doyle with four minutes of the first half remaining, though Ashley Hunter's header from George Glendon's free-kick was bread and butter for the ex-Blackpool stopper.

It was less straightforward for his counterpart Alex Cairns when Marshall closed on his attempted clearance with a block that nearly looped into the top corner.

Marshall seemed to carry the most threat of those on the pitch and he was released down the left within a minute of the restart, forcing Cairns into a near-post stop with his foot as there were no black shirts looking for the pull across.

The frustration at his team's inability to create openings was displayed by Cod Army boss Uwe Rosler when he punched the air and vented his anger under the fourth official's nose after David Ball was adjudged to have fouled Romain Vincelot in the Bradford box.

And shortly after he replaced midfielder Glendon with former Bantams forward Devante Cole as the final half an hour approached with Fleetwood showing little evidence they were capable of staging a fightback.

Liverpool loanee Cameron Brannagan was next to arrive as Rosler sacrificed one of his centre-backs in a bid to get a grip of the contest, yet it could only immediately yield a header from Bobby Grant that Doyle easily claimed.

Not even the final throw of the dice of Wes Burns' introduction would work for Fleetwood as Bradford comfortably ensured another Wembley trip.